Word order in the past tense in the Croatian language 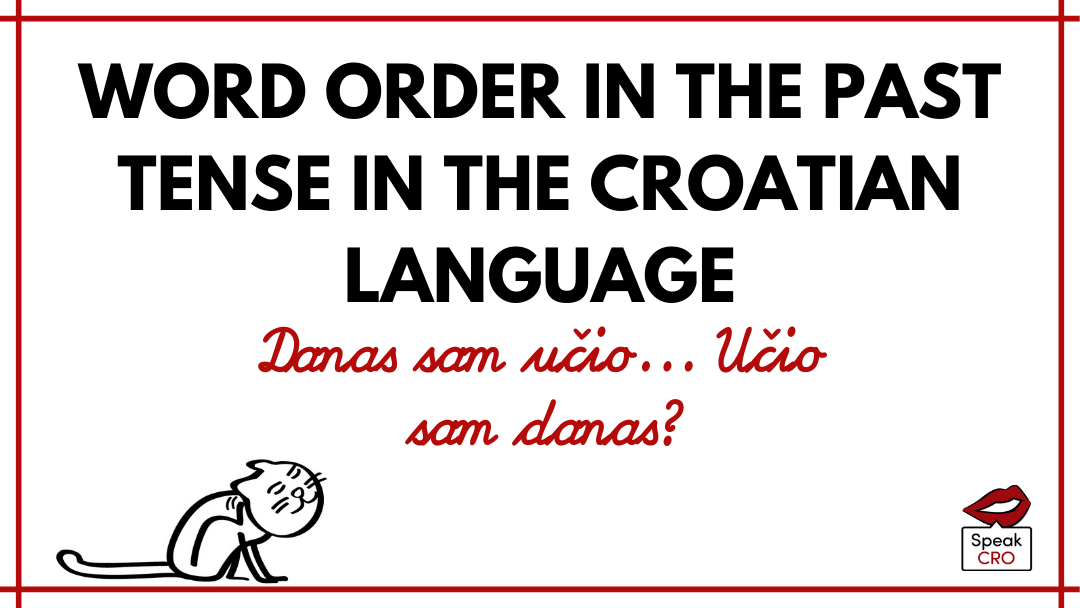 While in English you get information about what’s going on in a sentence from the word order, in Croatian you get much of that information from the endings of the words, so the order of the words can be more flexible than in English. That still doesn’t mean you can do whatever you want with the order of the words in a sentence. We know it can sometimes be a bit challenging, so let’s try to clear that up a bit. Ready? Let’s learn some Croatian! 🙂

What are enclitics and what do they have to do with the word order in Croatian?

As you already know from our previous posts, the verb biti (to be) has a long, stressed form (jesam, jesi, jest…) and a short, unstressed form (sam, si, je…), also called the enclitic form. There are a few enclitics in Croatian. It is a characteristic of them that they have no stress and are pronounced as though they are part of the preceding word, so they can’t be the first word in a sentence.

As a reminder: the affirmative form of the past tense consists of a short form of the biti (to be), which is an enclitic, and the main verb. For example, in the sentence Ja sam učila or Učila sam (I learned), učila is the main verb and sam is an enclitic. You should pay attention to the word order since enclitics come right after the first stressed word in the sentence.

a) If the is included in the sentence (it isn’t always), the enclitic is placed right after the subject:

b) If the subject is omitted, the enclitic is placed after the main verb.

Vozila sam. – I was driving. / I drove.
Šetala je – She was walking. / She walked.
Razgovarali su. – They were talking. / They talked.

c) If the sentence starts with some other word, it looks like this:

Exercise: Fill the gaps with the suitable past tense form of a given verb. The pronoun (ja, ti, on…) in brackets tells you which person you are writing about, but you mustn’t include it in the actual sentence:

d) If a sentence is very long and complex, the enclitic can sometimes be quite far away from the main verb.

Victoria je od ponedjeljka do petka bila u Šibeniku. – Victoria was in Šibenik from Monday to Friday.

So, once again: regardless of where the main verb is, always keep in mind to put the enclitic after the first stressed word in the sentence!

What happens with the other forms of the verb biti – the negative form or the long, stressed form?

It would probably be useful to mention that the negative forms of the verb biti: nisam, nisi, nije… (used to form the past tense, negative) and the long, stressed form of the verb biti: jesam, jesi, jesu… are not enclitic forms, so the rule that applies to enclitics doesn’t apply to them.

I hope that this blog post has helped you at least a bit to have a clearer picture of the word order in the past tense in Croatian. If you would like to practice this online with a real person one-on-one, feel free to contact us.

What other topics would you like us to write about?

Learning Croatian continues… Next Tuesday we are learning about the negative form of the past tense. If you want us to send you an email with the next Croatian grammar lesson, put your email address here.