The locative case in the Croatian language
Where are you? What are you talking about? 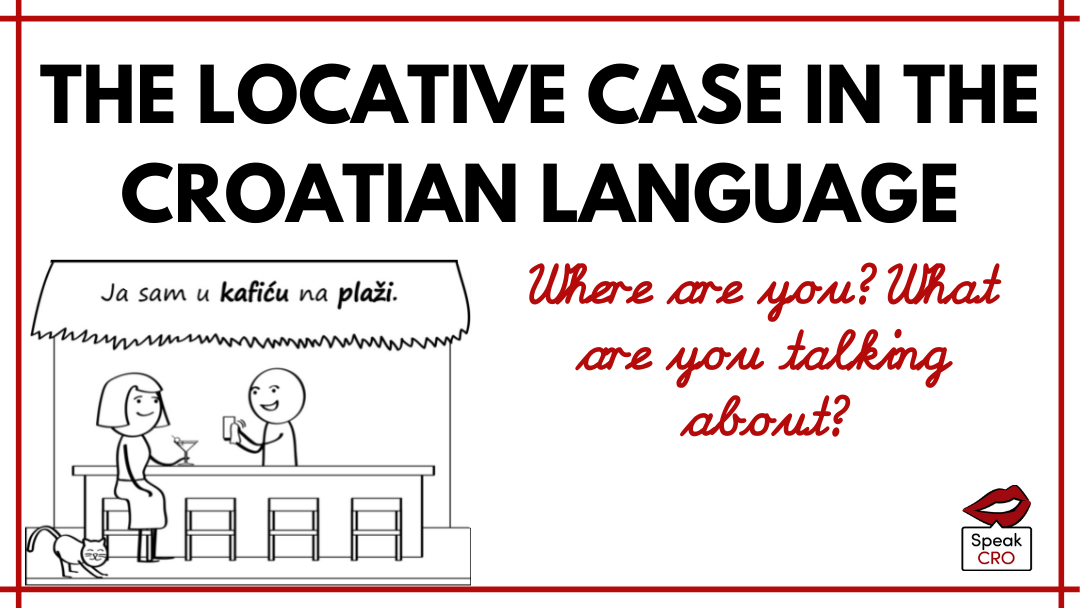 The locative is one of the easiest to learn in the Croatian language. The most important thing to know is that the locative case is primarily about being na (on or at) or u (in/at) some location.

u – in/at (direct translation is in, but it can also be at)
na – on/at (direct translation is on, but it can also be at)
o – about
po – all over, around, on. There is no direct translation for this preposition in English. It is used when an object is moving around or is spread on a surface (grass, sea, street, park, etc.), e.g. I am traveling around Europe. – Putujem po Europi.
pri – at, near. Pri is used when an object is not exactly at a certain place, but very close to it, e.g. I am near the top of the hill. – Ja sam pri vrhu brda.
prema – towards; according to

You will be relieved to know that the endings in the locative case are the same as those in the dative. Whew… one less set of endings to learn! What is more, the locative is always identical to the dative forms for other types of words that change in cases (adjectives, pronouns, and some numbers).

So, here are the endings of nouns in the locative case:

The table of the locative form of nouns, compared with the nominative

u  – Vino je u čaši. – The wine is in a glass. (nominative: čaša)
na – Večera je na stolu. – Dinner is on the table. (nominative: stol)
o – Ovo je knjiga o Dalmaciji. – This is a book about Dalmatia. (nominative: Dalmacija)
po – Putujem po Europi. – I am traveling all over Europe. (nominative: Europa)
pri – Moja kuća je pri vrhu ulice. – My house is near the top of the street. (nominative: ulica)
prema – Šetam prema plaži. – I am walking towards the beach. (nominative: plaža)

Locative and accusative confusion? No way.

Ja sam na terasi. – I am on the terrace. (You are there, terrace is your location – locative.)
Idem na terasu. – I am going to the terrace. (You are on your way, you are still not there – accusative.)
Ana je u školi. – Ana is in school. (Ana is there, school is her location, it’s where she is – locative.)
Ana ide u školu. – Ana is going to school. (Ana is on her way, she is still not there – accusative.)

The same distinction applies for any form of motion:
Stol je u kući. – The table is in the house. (Locative)
Stavio sam stol u kuću. – I have put the table into the house. (Accusative)

Next Tuesday you can learn more about when to use u and when na. If you would like us to send you an email with the next Croatian grammar lesson, put your email address here.

And finally… Razgovarajmo o vinu koje je na stolu u konobi. – Let’s talk about the wine which is on the table in the tavern. This sentence uses the locative case three times. Can you identify them? Leave your answers in the comments below!