The dative case in the Croatian language

I have some good news and some bad news about the dative .

So, let’s start this week’s journey with the endings of in the dative case – keeping in mind that it’s not just the nouns that change in cases; , and some numbers change in cases, too, but we’ll focus on them in our future posts. While the rules on when to use each case are always the same, it’s the endings that differ for different types of words. So, once again, in this series of posts about the cases, we are focusing primarily on noun endings and leaving the other endings for later on.

The table of the dative form of nouns, compared with the nominative

If you find learning all of those endings of words for different cases a bit hard to memorize, don’t despair! After we learn all the cases, we’ll publish a separate blog post with tips and tricks for memorizing endings for cases of nouns in Croatian.

The dative case as an indirect object

Remember that in a sentence are always in the accusative case? But who wants to analyze sentences every time to think whether you have a direct object or not in order to use your cases right? Well, when it comes to the dative, you have to think about also… Do I see many question marks above your head right now wondering what on Earth an indirect object is? 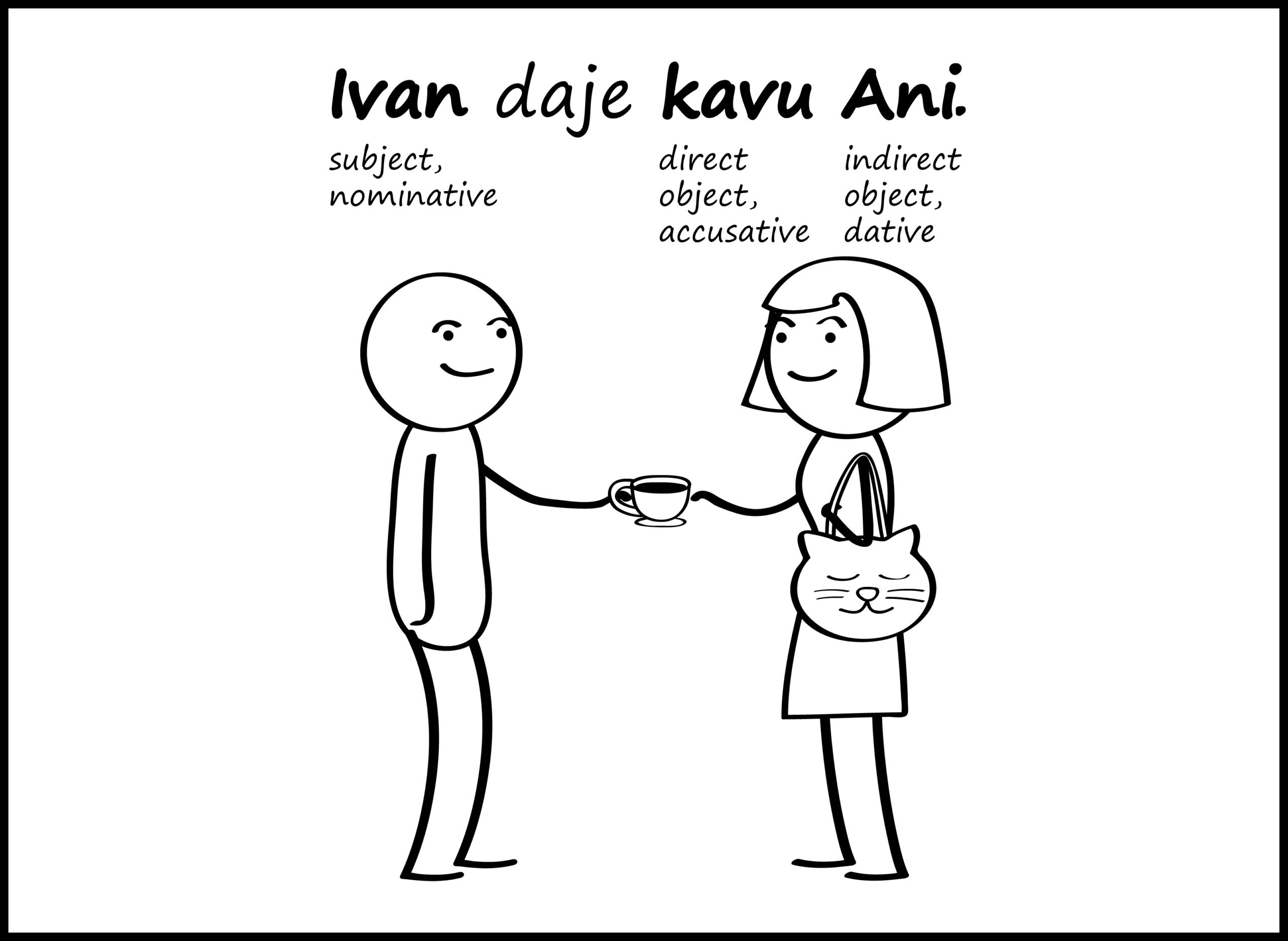 The dative case denoting direction – approaching or nearing something

Besides the usage of the dative case as an indirect object, dative also denotes direction – more precisely, approaching something or somebody. For example:

Trouble recognizing the dative case? There is a trick!

So, even though it sometimes might be a bit tricky to “detect” the dative case in a sentence, the good news is that the English language version of the same sentence very often (but not always!) has the preposition to (to someone or to something), as in our examples above: Ivan daje kavu Ani. (Ivan is giving a coffee to Ana.) or Ana daje čokoladu Ivanu. (Ana is giving chocolate to Ivan). It’s just that in the Croatian version of a sentence, instead of using the preposition to, we change the ending of the noun. So that’s why noun endings are so important!

Whenever you can ask questions komu (to whom/who to) or čemu (to what) about your sentence, you can be sure that the answer is in the dative case. For example:

Prepositions with the dative case

There are not many in Croatian that can come in combination with the dative case. What is more, one of the most frequent prepositions – k or ka (to) – can be omitted as the sentence can function with them or without them.

Do you have any questions about the dative case in Croatian?

Learning Croatian continues… Next Tuesday we will learn about the accusative case in the Croatian language. If you would like us to send you an email with the next Croatian grammar lesson, put your email address here.