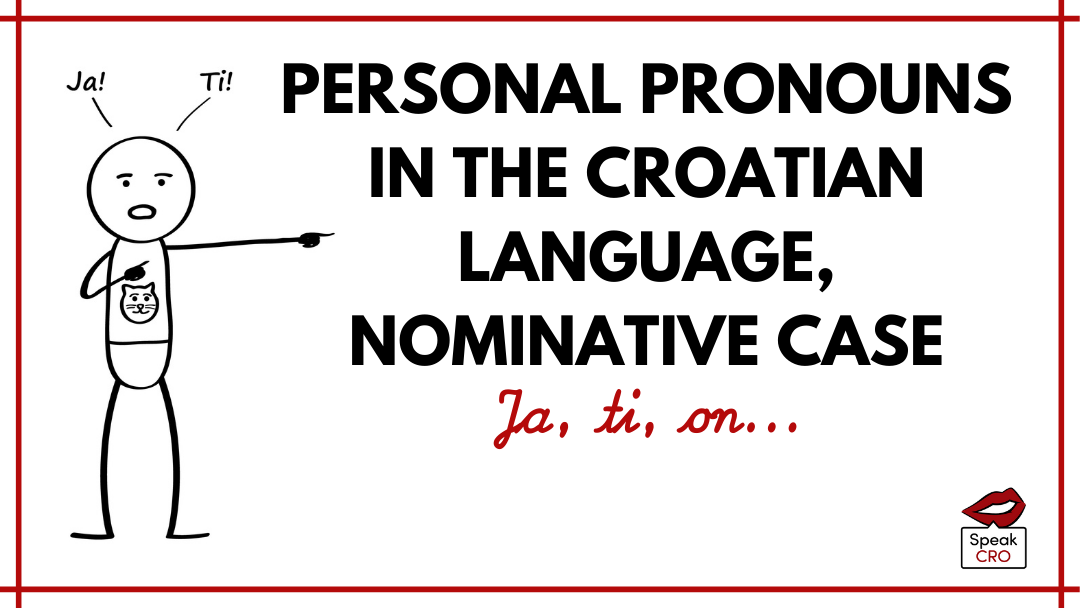 There is a more or less direct translation for every English word to a word in Croatian, isn’t it?

Can’t be more straightforward than that, right? But, wait! What is this?

Is there a choice of which word to use? No, the two words for you and the three words for they have different and specific meanings. The difference between ti and vi is a matter of singular (ti – one person) vs. plural (vi – more than one person; “you guys”), while the difference between oni, one and ona are to do with the gender of they. These are useful distinctions in the Croatian language that don’t exist in English. They might give the English speaker a little bit of trouble in the early days of learning Croatian, but not for long.

Let’s look at the full table of the personal pronouns (nominative case) in Croatian before we go on.

He or she can mean an inanimate object, and it can mean a person in the Croatian language

It is important to mention this: on (he) does not only refer to a male person, but also to any masculine – yes, that means an inanimate object, too. So, both muškarac (a man) and automobil (a car) would be referred to as on (he) – because both are grammatically masculine. Likewise, ona (she) can stand for žena (a woman), kava (coffee), or any other grammatically feminine noun. That leaves us with the conclusion that ono (it) doesn’t necessarily refer to an inanimate object, like in English, but to any grammatically neuter noun – even if it means a person, like dijete (a child). However, you can see why genders matter in the Croatian language! So:

Imagine a teacher in an English-speaking school talking to two students. He says “Will you go to the headmaster’s office, please.” The students look at each other… was he talking to one of them, or to both of them? There is no way to distinguish in English. But it is quite clear in Croatian.

However, there is another important difference in the usage of ti and vi. Vi can also be used in the singular, but while ti is used with a friend, a member of your family, vi is used when talking (or writing) to somebody in a formal situation – like in a business environment, in the bank, with teachers or professors in school or university, also in a shop or in a post office… basically in any kind of situation where you are talking to somebody that you don’t know, and especially if that person is at their work or you are at your work.

When I was a kid, my mum used to tell me to use vi with anybody who is old enough to be my mum or dad. That seems quite a good guideline to me. Nowadays there is a tendency towards being more informal, so in modern companies where the workers are mostly young people, it’s not uncommon for them to use the informal ti with their boss, which was almost unthinkable 20 or more years ago.

Have a look at this example too: 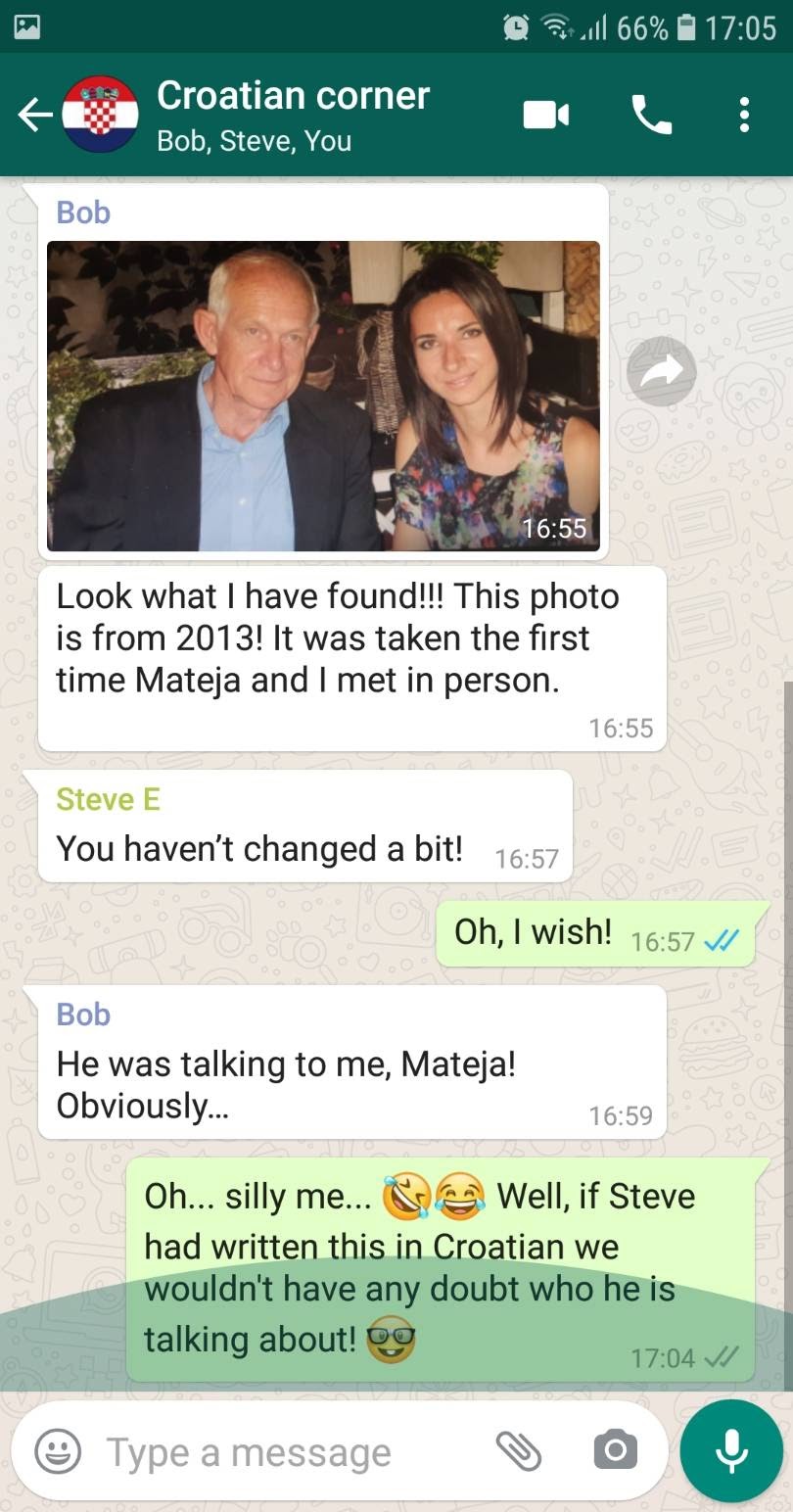 If the WhatsApp messages above (true story) were in Croatian, there wouldn’t be any confusion as the sentence You haven’t changed a bit in Croatian would be:

So, if these three people in the WhatsApp conversation were friends and used the informal mode of communication in Croatian, there would be no doubt who the sentence refers to. However, we have to make an allowance for the possibility that if those three people used the formal way of communication in Croatian (Niste se nimalo promijenili), we couldn’t be sure whether the sentence refers to only one of them or to both. 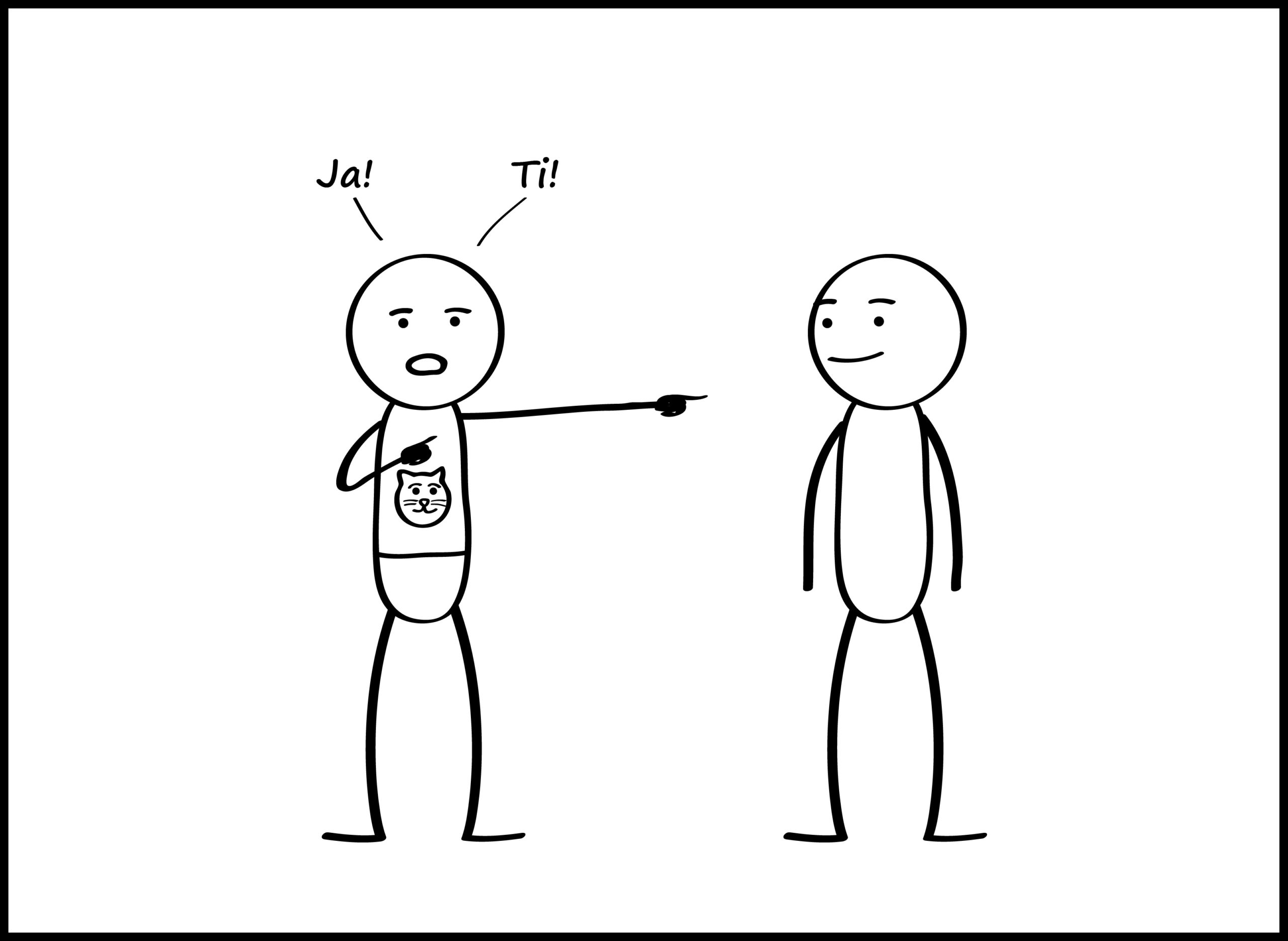 Do Croats always know whether to use ti or vi?

It is also quite often the case that native Croatian speakers are not really sure which form they should use in certain situations. An example is when you are at a not very formal business meeting with a person that is roughly your age and your ranking in a business sense. It often happens that a conversation starts with the use of the formal vi, and then one of the people (usually the one with the higher ranking professionally, or the older one) suggests switching to the informal ti form. Which form to use with whom can be slightly different in different parts of Croatia. If you are not sure which one to use, it’s safer to use the formal one: otherwise, you can be considered impolite. Of course, if you are a foreigner and use the wrong one, it’s not such a big deal – the people will be quite tolerant. If they are not, you can consider them to be as******. 🙂

Have you ever felt uncomfortable not being sure whether to use ti or vi? How did you deal with it? Tell us your story in the comment section below!

Three genders for the personal pronoun they (oni)

In the Croatian language, a different word is used for they, depending on the gender of the people or things referred to – that is, whether the gender is masculine, feminine, or neuter, the same as with the difference between he, she and it, as explained above. So, at least in this sense, the Croatian language is more specific than English.

OK, if these are your first encounters with learning Croatian, you are probably wondering how the heck children are neuter. You can read more about that in the post Genders in the Croatian language. Or, if you want to learn about it with one of our teachers in one-on-one online lessons, click here.

If you are already a little bit familiar with the Croatian language, you might have noticed that vi is sometimes spelled with a capital letter and sometimes not. In general, if you are using it to refer to a few people, it should be spelled with the lowercase, and if you refer to one person formally, you can choose between using the lowercase or uppercase. Lately, it has become very fashionable to use and overuse Vi with a capital letter.

By the way, what are your thoughts on Croatian wine? Do you think they are izvrsna or you don’t really like them? You can leave your comments below.

In real-life situations, it’s usually obvious from the context who you are talking about. (Stop thinking about the wine! We are back to the difference between ona and ona. 🙂 ) Besides that, there is quite a small number of neuter nouns in Croatian and in real-life situations you’ll rarely find yourself in a situation where you would really have to use ona in neuter plural form. So, relax.

Besides the nominative form, there is more…

“Pronounless” sentences in the Croatian language

Another thing that our students often complain about is that almost all of the available literature for learning Croatian as a second language teaches personal pronouns in this way:

…to find out later that’s not really how Croats speak. The thing is: if we know from the context who we are talking or writing about, the pronoun can be omitted. In that scenario, the sentences would be:

Take this as a little preview, we’ll write about this topic in more detail in our future blog posts. In the meanwhile, we highly recommend you to watch our student Bob’s video or read his blog post about this issue.

Learning Croatian continues! Next Tuesday we will learn about the tenses in the Croatian language. If you want us to send you an email with the next Croatian grammar lesson, put your email address here.

If you would like to learn Croatian online with a teacher one-on-one, you can book your free trial lesson here.