Numbers and nouns in the Croatian language
How to order some drinks in Croatian? 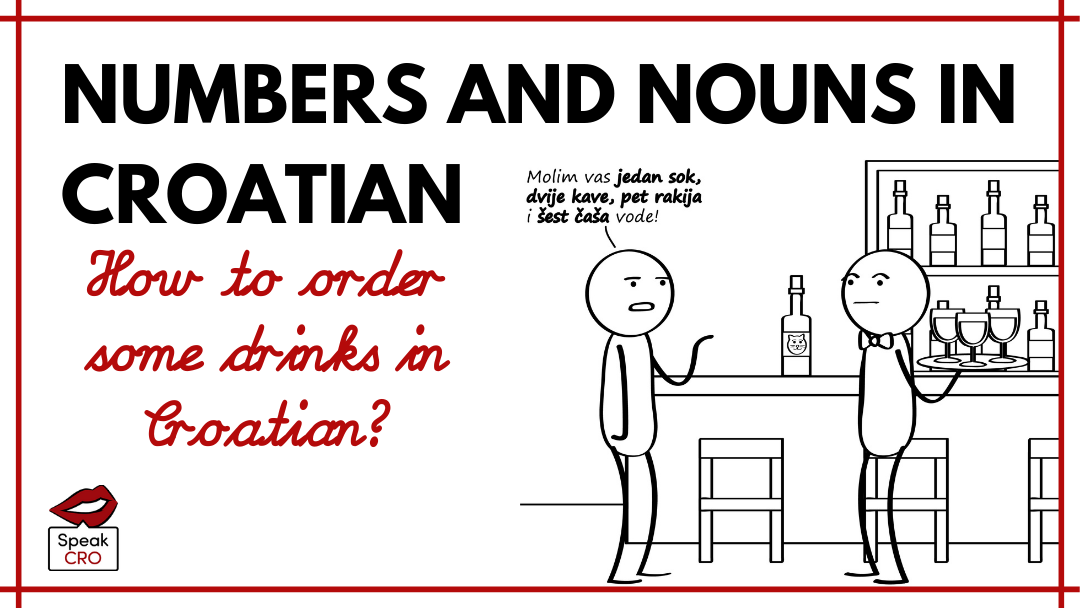 If there is something in the Croatian language that should be learned step by step and with not too much hurry to master it, it’s how to use numbers with the . Believe it or not, sometimes it even gives headaches to native speakers. For example, there is a famous Croatian film from 1968 called Imam dvije mame i dva tate (I have two mums and two dads), which is a title that sounds quite simple when you say it in English. But, as unbelievable as it may sound, it’s not so straightforward in Croatian. In fact, as a part of an experiment, some native speakers (all non-linguists, of course) were told that the title of the film is not correct and were asked if they could come up with the correct one. A dozen incorrect answers and a fair bit of silence was there in the room before the first person gave the correct answer which is Imam dvije mame i dvojicu tata.

Try to ask your closest native Croatian how to say in Croatian: I have a car with four doors and let me know the answers. 🙂

After this, I probably don’t have to give too much further explanation of why I believe that mastering the numbers should be among the last things to master in Croatian. However, the good news is that there are some parts of learning numbers and their that are quite simple to learn, for example, what to do with a noun after a number, which is what we will learn here today.

So – let’s learn some more Croatian! 🙂

Numbers and nouns in the Croatian language

In English, when we talk about numbers with nouns, things are pretty simple: we use the number 1 (and all of its compounds – except 11) with the singular form of the noun (so: 1, 21, 31… coffee), while all other numbers come with the plural form of the noun (so: 2, 5, 7, 10, 11, 105 coffees). In Croatian, it’s a bit different: as odd as it seems, you never use the nominative plural form of nouns with the numbers, but genitive (singular or plural).

Let’s take a look at the table that shows what exactly is going on here:

*Or any other case that the noun would normally take.

Need more clarification? Just keep in mind these three things when using numbers with the nouns in Croatian:

For example:
Koliko koštaju tri kave? – How much do three coffees cost?
Dvije rakije su na stolu. – Two rakijas are on the table.
Možemo li dobiti četiri soka? – Can we have four juices?

The number one acts as an adjective

If you pay a bit more attention to the number one, you will see that it acts a bit differently than other numbers – it acts as an and it changes in cases in exactly the same way that adjectives do. That means the number one will be in the same case as a noun that comes right after it.

For example:
Jednu kavu, molim. / Ja bih jednu kavu. (accusative) – One coffee, please. / I would like to have one coffee.
Koliko je jedno pivo? (nominative) – How much is one beer?
Može kava s jednim šećerom? (instrumental) – Can I have a coffee with one sugar?

Mind that all compound numbers ending in 1, except for 11, act just the same, as mentioned above.

It’s interesting that the number 1 (jedan / jedna / jedno) is sometimes used in the meaning of a or an:

For example, the sentence:

can be translated as either

I bought an interesting book.

I bought one interesting book.

depending on the context.

Do numbers have cases, too?

Well… yes! But we feel you’re ready for some good news. So, only numbers 1, 2, 3, and 4 change in cases. More good news? Most of the time, you’re good with using numbers with the nouns as described here, without changing them further through cases, since a good deal of Croats would do so. But don’t tell anyone we told you that! 🙂

Exercise: Write the correct form of the noun in brackets, based on which number precedes it.

Are you ready to order some drinks in Croatian? 🙂

Learning Croatian continues… Next Tuesday we are learning about the demonstrative pronouns used to answer the question koji (which). If you want us to send you an email with the next Croatian grammar lesson, put your email address here.