How to say ‘my’, ‘yours’, ‘his’… in Croatian?
Possessive pronouns in the Croatian language, the nominative singular form

Possessive pronouns are used to refer to a specific person(s) or thing(s) belonging to someone. In English, these would be: my (mine), your(s), his, her(s), our(s), your(s), and their(s).

Gdje je tvoj brat? Moj brat je ovdje. – Where is your brother? My brother is here.

Warning: there will be a number of tables in this blog post, but you’ll see later on that it’s not nearly as bad as it can look at first sight, since there is one very simple catch.

Possessive pronouns in the Croatian language, masculine (the nominative case)

OK, let’s see what possessive pronouns are there in Croatian, together with their English equivalents:

But, wait a second… In the Croatian language, have (you can learn more about it in our post about genders in the Croatian language)… Does that mean that we have to do something different if we want to say my brother (which is masculine) in comparison to my sister (which is feminine)? The answer is: yes, a bit different. You can use the table above if you are referring to someone or something that is masculine, e.g. brat (brother), otac (father), muž (husband), stan (apartment), brod (boat)… Like in the examples here:

Moj otac je iz Splita. – My father is from Split.
Tvoj brat je dijete. – Your brother is a child.
Njegov prijatelj je pilot. – His friend is a pilot.
Njezin muž je visok. – Her husband is tall.

How about doing an exercise and checking if you have figured it out?

Possessive pronouns in the Croatian language, feminine (the nominative case)

If you refer to somebody or something that is feminine, e.g. sestra (sister), mama (mum), kćerka (daughter), kuća (house)… you basically do the same as in masculine, it’s practically copy-pasted table from above, just with the -a ending! 🙂 This -a ending for feminine pronouns is pretty logical as you already know from before that -a ending is a typical feminine ending. So, let’s see how that looks: 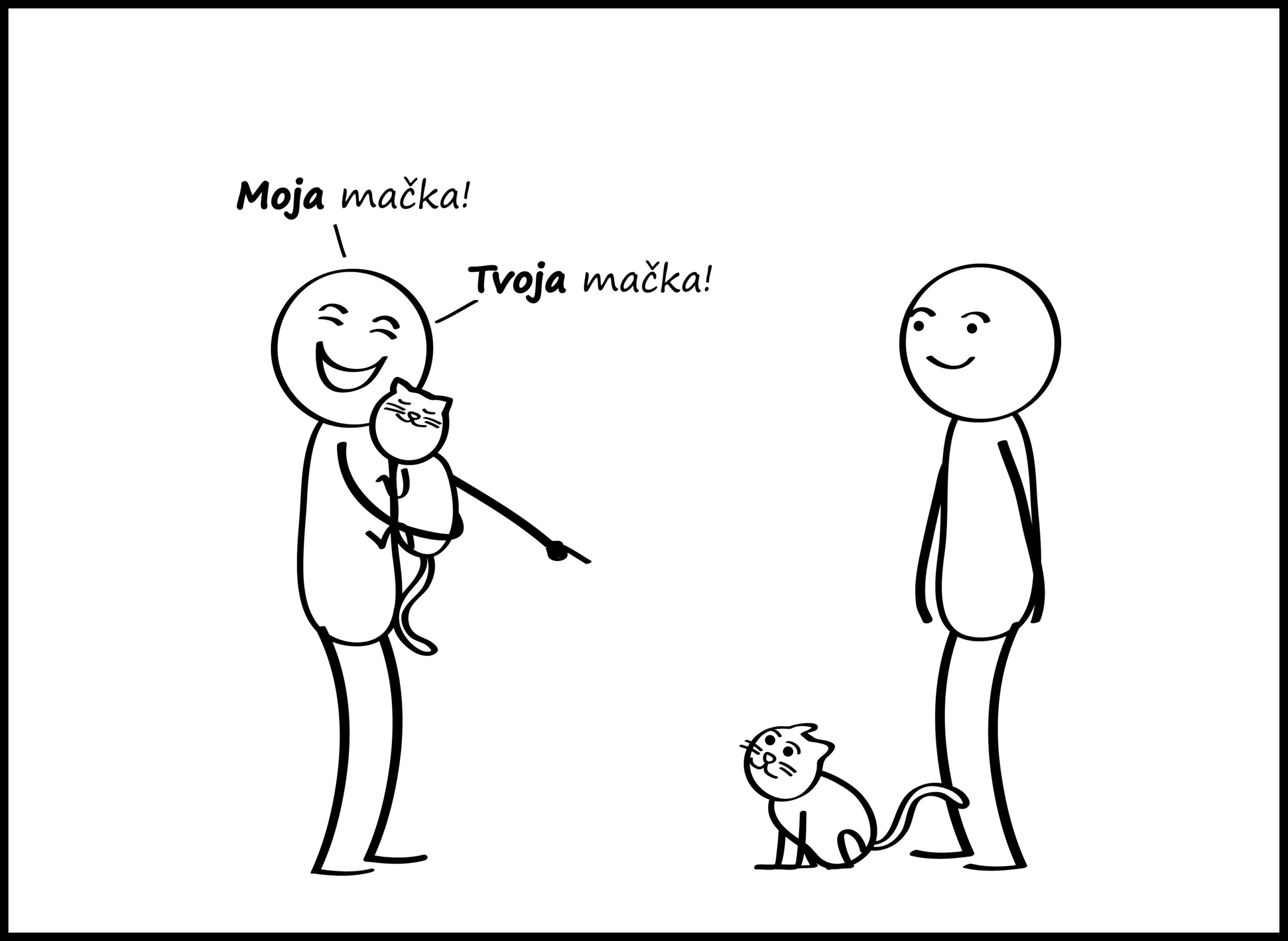 Moja mama je Hrvatica. – My mum is a Croat.
Tvoja sestra je u Dubrovniku. – Your sister is in Dubrovnik.
Njegova sestra je pametna. – His sister is smart.
Njezina haljina je skupa. – Her dress is expensive.

Naša kuća je na moru. – Our house is at the seaside.
Vaša kćerka živi u Zagrebu. – Your daughter lives in Zagreb.
Njihova prijateljica je profesorica. – Their friend is a professor.

Through exercises to perfection…

Possessive pronouns in the Croatian language, neuter (the nominative case)

Now that you have learned how masculine and feminine forms of possessive pronouns in the Croatian language work, you are probably guessing how neuter form works:

Yes, it’s again the same copy-pasted table, just with -e and -o endings, as those are typical neuter endings. So, if you are talking about somebody or something neuter, like vino (wine), more (sea), pivo (beer), dijete (child)… you use this third table. (As you can see, I have just mentioned all the most important neuter words in Croatian here… 🙂 )

Now you can see that the simple catch mentioned at the beginning of this post is: all the tables are practically the same table, just in different genders: masculine, feminine and neuter. Just remember the simple rule: any word that relates to the noun (not just a possessive, but also, say, an or a demonstrative) “takes” the noun’s gender. Not that complicated, right?

How does this look so far? Not that bad, right? Let’s see whether mixing all the genders in one exercise will confuse you or you have mastered this:

What about other cases of possessive pronouns?

What we have learned in this blog post is only the nominative singular form of possessive pronouns in the Croatian language, each of those forms besides singular (e.g. moj brod – my boat) also has the plural form (e.g. moji brodovi – my boats) and also each of them changes in , which is something that we’ll learn in a separate post. Learning Croatian… step by step. 🙂

If you feel like learning Croatian with another human being one-on-one would be a good idea, feel free to contact us.

Learning Croatian continues… Next Tuesday we are learning about how to differentiate ć from č, and đ from dž. If you want us to send you an email with the next Croatian grammar lesson, put your email address here.