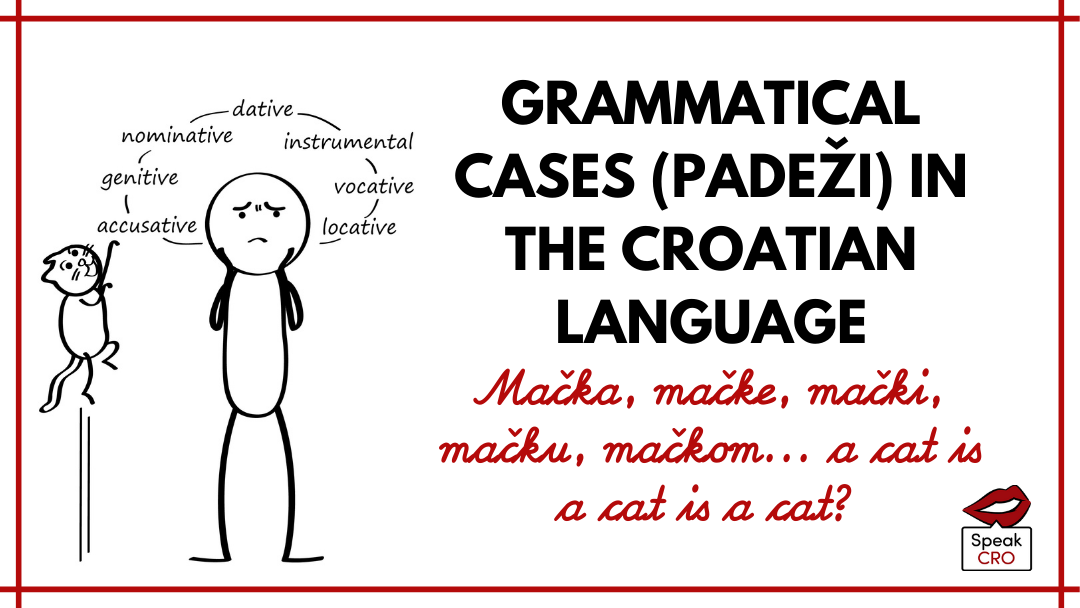 If you have ever been traveling to Croatia, or have been around the people speaking Croatian, you have probably noticed some funny things going on. For example, if your name is Anna, they have been saying Anna and Anne and Annu and Annom… And you are thinking like: “Hey, guys, you have just got my name right in the first place, what are you doing with it now? Can you, please, leave my name in peace?” Or, if you are from Australia, they sometimes say Australija, then other times Australije, then Australiju, or Australiji… Well, it’s pretty likely that those weird endings mean that those words have been changed in cases (padeži). So, if you want to say that you are in front of Anna (ispred Anne) or with Anna (s Annom)… you actually change the ending of the word – which means you change the case of the word.

What are grammatical cases?

The definition that you would find in grammar books would go something like this: Cases (padeži) are a grammatical category of nouns, pronouns, adjectives and numbers where these words get different endings depending on the context, i.e. their function in a sentence. For example, a noun would be in its basic form (i.e. the nominative case) when it is a of a sentence, but will get different endings (i.e. be in different cases) after prepositions or when used as an in a sentence.

It’s difficult to define cases in a way that is perfectly clear. Perhaps the best way to get a better picture is through the examples in the table below.

How many cases are there in the Croatian language?

In the Croatian language, there are 7 cases: nominative, genitive, dative, accusative, vocative, locative, and instrumental. Each of them has form.

Just to give you a sense of what I am talking about, here are the examples of the noun mačka (cat) in all cases: 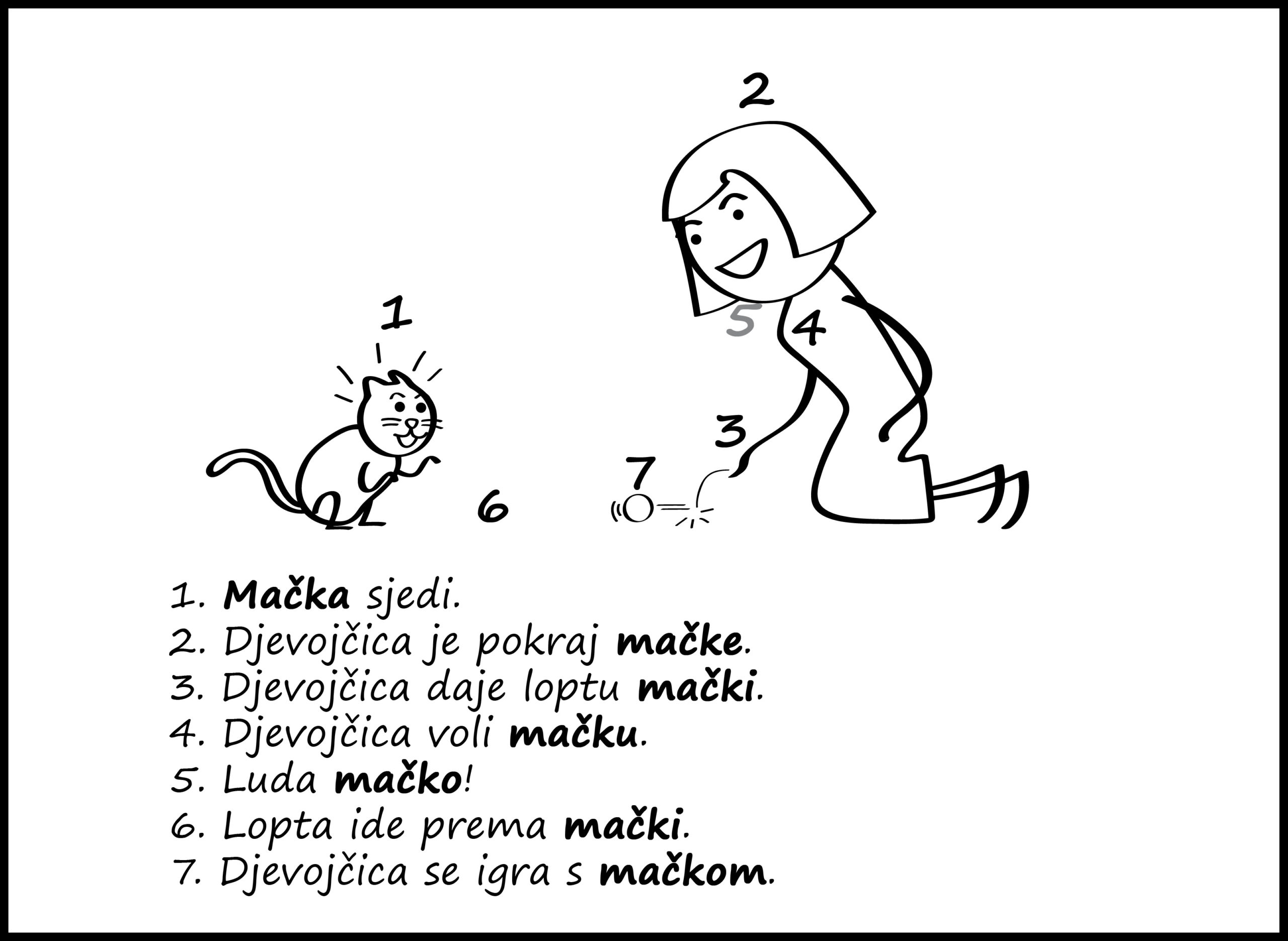 So, the word mačka (cat) has changed its form in different sentences. There is a set of rules for each case, which is something that we will be learning about in future posts.

What types of words change through cases?

There are four types of words that change from case to case:

Is it important to learn all the cases in Croatian?

Some cases in the Croatian language are in use much more frequently than the others. For example, nominative, genitive or accusative are much more frequent than vocative. Actually, the vocative case is slowly being squeezed out of use just more and more. You will find rules for the vocative case in every grammar book and every textbook for learning Croatian, but in real life Croats sometimes use it and sometimes they don’t, they often simply replace it with the nominative. But what about the other six cases?

The answer depends on your goal in learning Croatian. If your goal is just to be able to say a few basic phrases for holiday purposes, like asking for directions or buying an ice-cream, then you’ll be pretty fine without knowing too much grammar. But, if your goal is to have a bit more complex conversations with your relatives or other Croats, then we would highly recommend that you learn the cases. The thing is that the endings play an important role in Croatian grammar, and if you don’t understand how they work, you will very soon hit your “glass ceiling”, maybe not that much in being able to express yourself in the Croatian language, as people will probably understand pretty much of your “Me Tarzan – you Jane” Croatian, but you’ll have bigger problems understanding them. 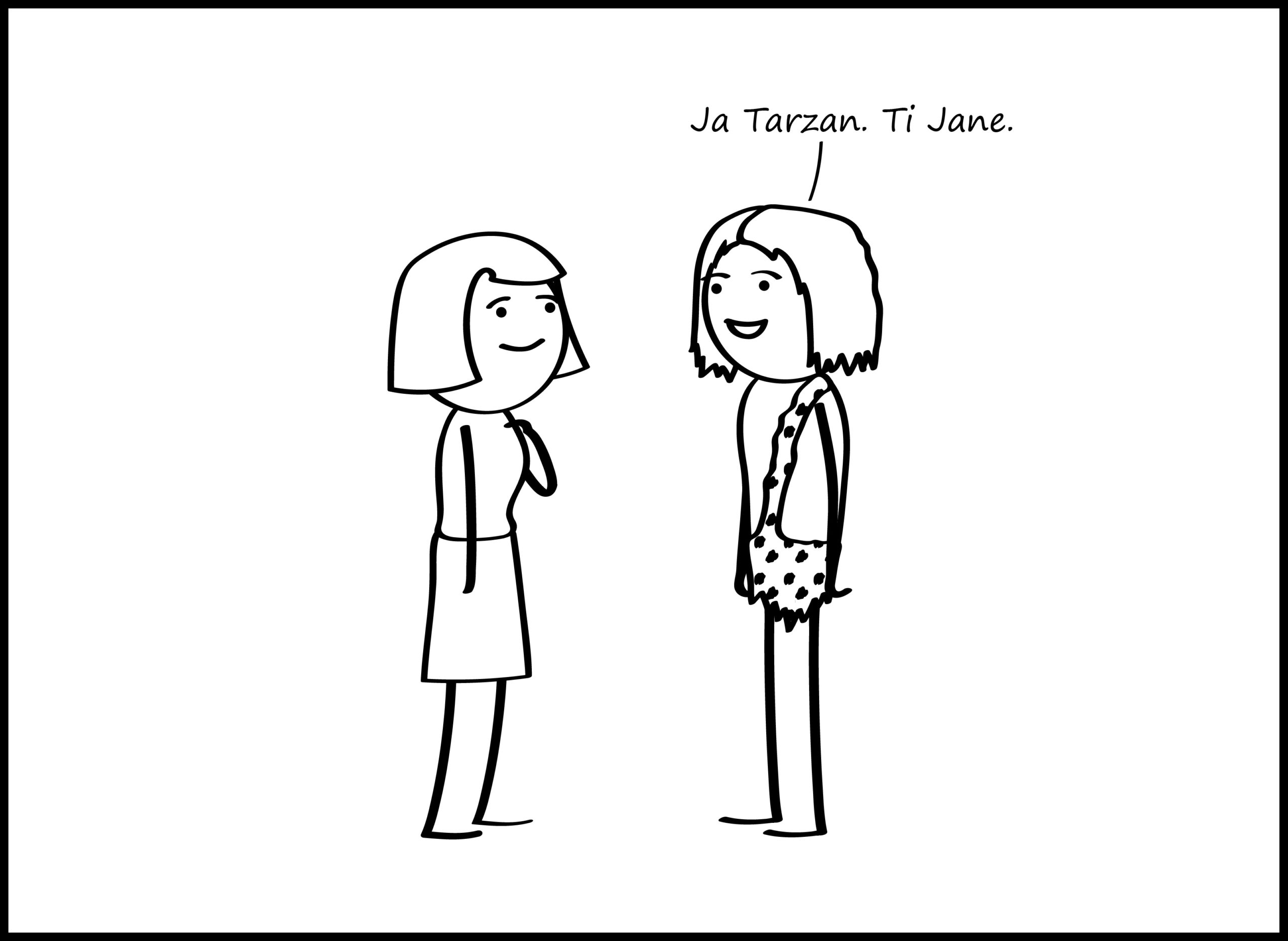 For example, can you understand this little dialogue?

Thumbs up if you can! But if you need a little help, here is the translation:

It sounds like a pretty simple dialogue in English, right? Explanation:

If it wasn’t easy for you to deal with this dialogue, you are definitely not the only one! We had a lot of students with the problem of dealing with Croatian grammar by themselves – in fact, many people decide to contact us when they reach the point where they maybe understand many of the words in a sentence but don’t understand what actually happened because they don’t understand how all of the endings and forms of words work. And we can tell you it’s much easier to learn things from the scratch than trying to relearn the right things that you have previously learned wrong as it’s inevitable that you’ll have gibberish endings and you’ll get used to them, which is later on hard to unlearn.

What about cases in the English language?

If you think there are no cases in the English language – think again!

In Old English, there were 5 cases (nominative, genitive, dative, accusative, and instrumental). Over time, the English language lost cases as they merged into the subjective (nominative), objective (accusative) and possessive (genitive) cases in modern English. Nowadays in English, nouns no longer change their form from case to case, but some pronouns do. So, when you hear pronouns like I and me, or he and him in the English language, these are remnants of cases.

Cases in other languages

Cases are not unique to the Croatian language. All Slavic languages like Slovenian, Bosnian, Serbian, Czech, Polish, Russian, etc. have them, as well as some non-Slavic languages. For example, the German language has 4 cases, Latin has 7, Korean and Japanese also have 7, Arabic has 3, Sanskrit has 8, Finnish has 15, and Hungarian has 28 cases (wow!). But the absolute winner is Tsez (spoken in the southern highlands of Dagestan, Russia) with 128 cases. OK, that’s a lot! 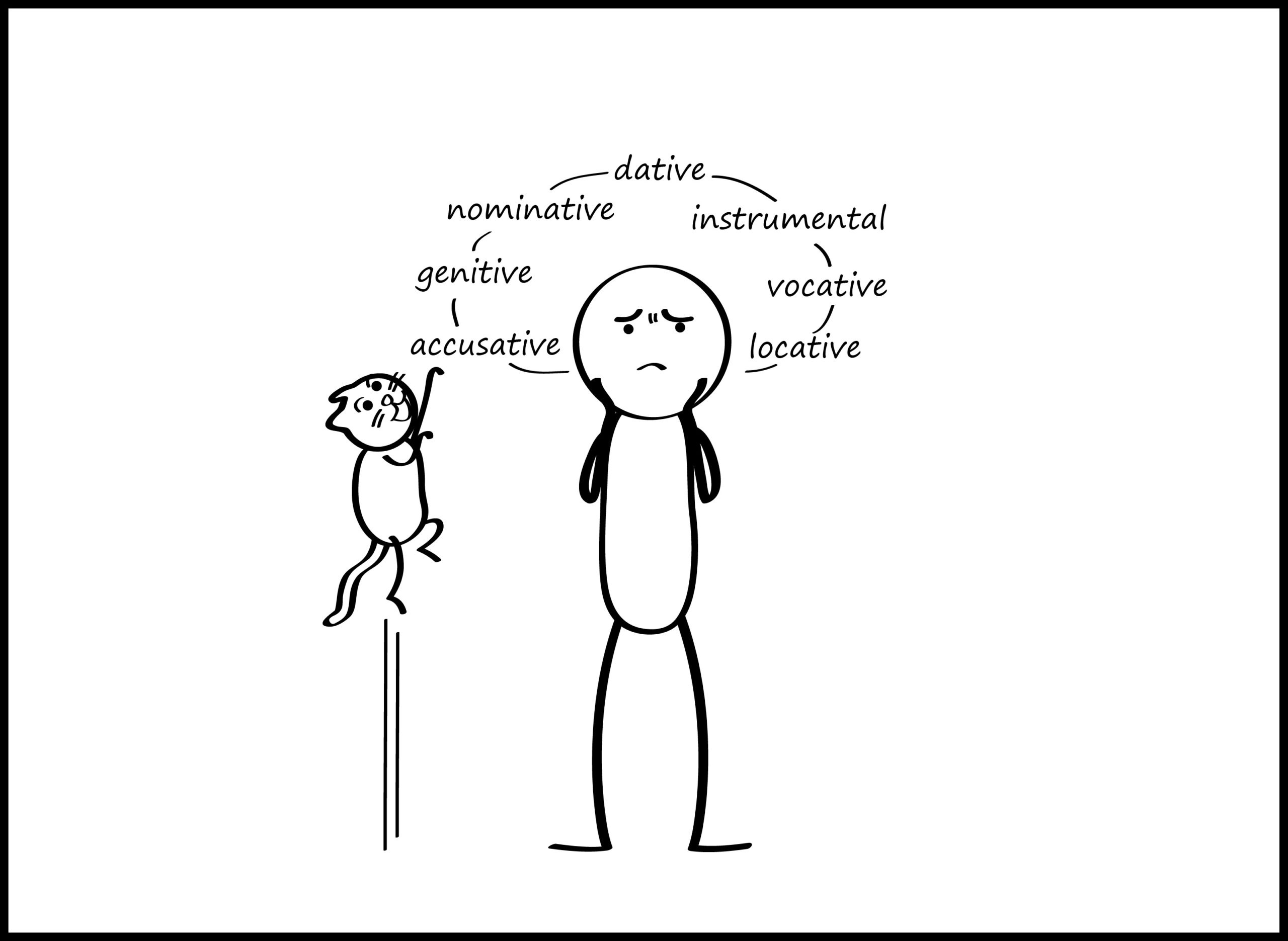 Second – you can try to learn cases by yourself and it’s great if you try to do that, but it’s very likely that you’ll need some professional help. Those of you who have tried to learn them by yourselves and with the help of your Croatian family and friends know what I’m talking about. We would love to know about your experiences, though! It would be great if you could share them in the comments below.

I hope this post has given you a bit better idea about what cases are and how to deal with them. How each case works will be explained in our future posts.

Learning Croatian continues… Next Tuesday we’ll learn about the nominative case in the Croatian language. If you would like us to send you an email with the next Croatian grammar lesson, put your email address here.