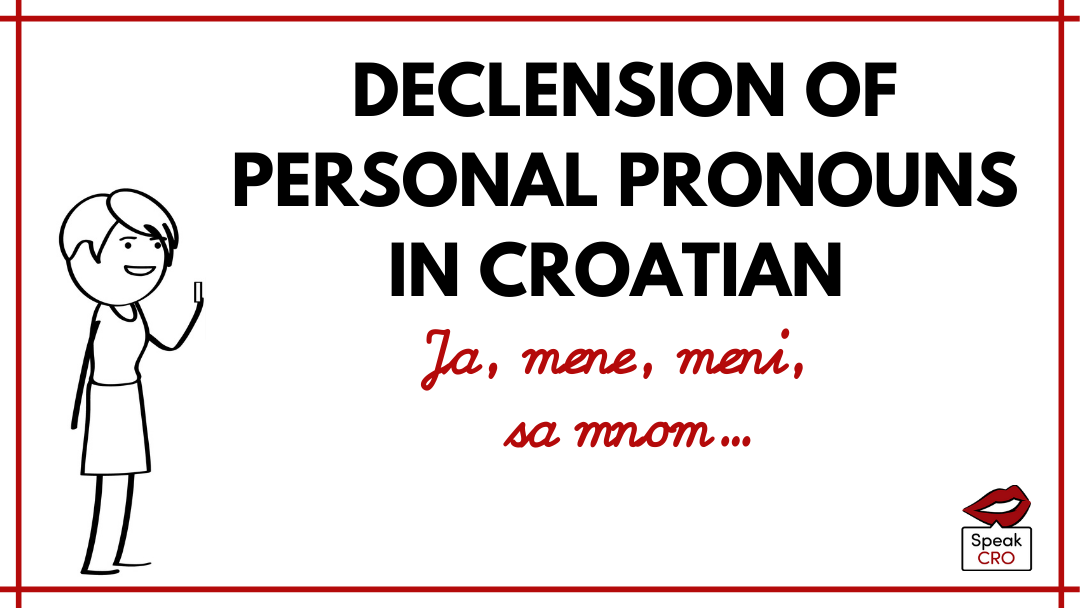 Quite often we have a student (who hasn’t been learning Croatian with us from scratch) who, when we come to the declension of , looks at us in wonderment saying: “What’s that? I have already learned my personal pronouns. Haven’t I?” When they realize that what they had previously learned was only the nominative form, and that there are 6 more of personal pronouns to learn, they find it as not a very pleasant surprise. Exactly that kind of student has been urging us for years to write and publish materials that will clearly explain that learning the nominative form doesn’t mean that you are now done with it. So, here we are… trying to make your journey of learning Croatian as clear and simple as it can be.

We know that learning cases can be challenging, especially for people who have never learned languages that have cases, but we also know that with the right guidance it can be done and, believe it or not, you can actually have fun doing it.

If you know what grammatical cases (padeži) in the Croatian language are, and if you and have already learned your cases for nouns from our previous blog posts: nominative, genitive, dative, accusative, vocative, locative and instrumental, then you have already done a HUGE part of the work, because the rules on when to use each of the cases are always the same, no matter if you are applying them to nouns, pronouns, adjectives or numbers (OK, the story about numbers can be a bit tricky, but that’s something we’ll deal with later on). In other words, once you learn the rules for cases, you have already done half of the work: the other half is learning the endings for , , and numbers. Some of those endings will be the same, some will be different so they need to be learned by heart.

Declension of personal pronouns in the Croatian language

*Nj is a very rare form, used only after prepositions (which often get the additional -a when used with nj). For example:
Stavila je ribu preda nj. = Stavila je ribu pred njega. – She put the fish before him.
**The short form ju is used instead of the usual short form je to avoid having je twice, one after another:
1. Before je (the 3rd person singular (he/she/it) form of the verb biti – to be):
Ona ju je zagrlila. – She hugged her.
2. After a word that ends in -je:
Nije ju zagrlila. – She didn’t hug her.

You may have noticed in the table above that the ending -e can be added to some of the pronouns in the instrumental case. Adding it is optional and it doesn’t make any difference grammatically: it’s just a matter of style. It’s in the table just so that you don’t get surprised if you see it used somewhere, but you don’t have to bother using it at all. For example:

So, let’s have a look at some examples of how personal pronouns are used in different cases:

NOMINATIVE: Ja učim hrvatski. – I learn Croatian. (or: I am learning Croatian.)
GENITIVE:  Mogu li sjesti pokraj tebe? – May I sit next to you?
DATIVE: Dala sam mu poklon. – I gave him a present.
ACCUSATIVE: Volim je. – I love her.
VOCATIVE:  Vi! – You!
LOCATIVE: Uvijek pričaju o nama. – They always talk about us.
INSTRUMENTAL: Idemo na plažu s njima. – We are going to the beach with them.

Although we have mentioned that a few times already in our previous blog posts, we’ll mention it again, because it’s important… If it’s obvious who the (ja, ti, on, Ivan, Ana…) in the sentence is, like in the sentence above Ja učim hrvatski, it’s very common in the Croatian language to leave the personal pronoun out of the sentence, as učim can only come with ja (and not with, say, ti, on, mi…), so it’s obvious and not necessary to also put ja to the sentence, except if you want to accentuate ja.

The reasons to use the long form are:

1. If we want to accentuate the personal pronoun (often in a disagreement), especially in comparisons or juxtapositions:

We have mentioned above that the short forms of the personal pronouns naturally come after the first stressed word in a sentence. When you dislocate the pronoun to any other position within the sentence, it must be used in its long form – and this counts as emphasizing, too. So let’s rewrite the sentences from above:

Tebi vjerujem. – I believe you.
Njih krivim. – I blame them.
Nju volim. – I love her.
Daj papir njemu. – Give the paper to him.
Nisam vidjela njega. – I didn’t see him.
Zato sam nazvala nju. – That’s why I called her.

It’s probably a good idea to divide the memorization of endings of personal pronouns into a few sections instead of trying to learn them all at once. Here are five useful tips to help you with that process:

– You can learn the declensions of ja and ti together, as they change through cases basically in the same way (mene/tebe, meni/tebi…).

– Also, mi and vi have the same endings through cases (nas/vas, nama/vama…), so when you learn the endings for one, you have basically learned the endings for the other one as well.

– The genitive form is identical to the accusative form of all personal pronouns except for ona (she).

– The dative and locative endings are the same for each of the singular pronouns respectively, i.e. for ja, ti, on, ona and ono (but keep in mind when to use the long and when the short form).

– The dative, locative and instrumental endings are the same for each of the plural pronoun respectively, i.e. for mi, vi, oni, one and ona (but keep in mind when to use the long form and when the short form).

Exercise: Choose the correct form of the personal pronoun written in brackets.

Do you have any questions about the declension of personal pronouns in Croatian?

Learning Croatian continues… Next Tuesday we are learning about the declension of interrogative pronouns tko (who) and što (what). If you want us to send you an email with the next Croatian grammar lesson, put your email address here.