Croatian alphabet and pronunciation
...or how to SpeakCRO 🙂 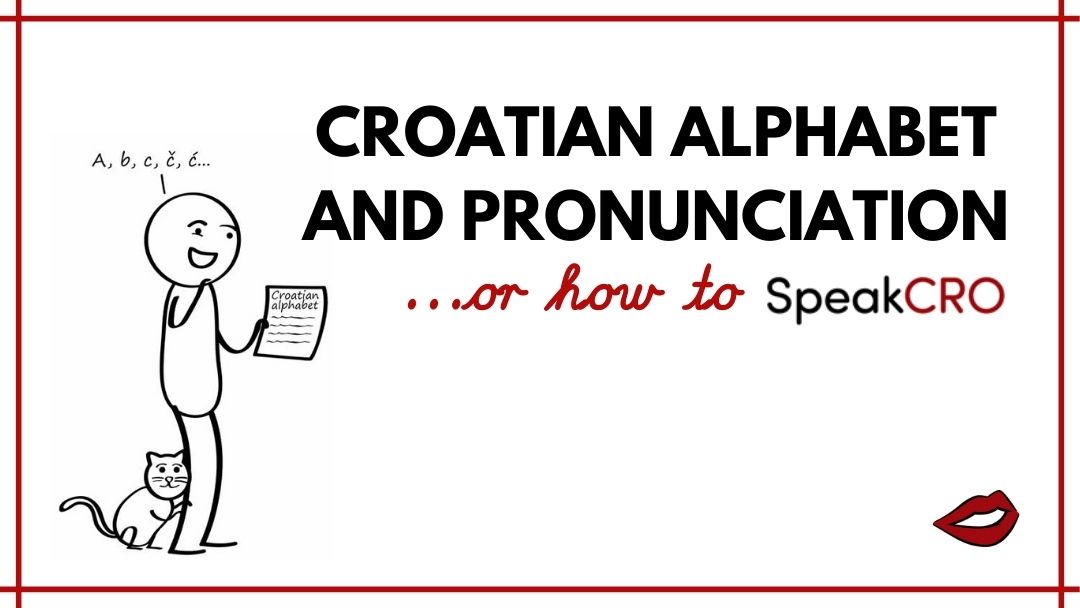 The Croatian alphabet has some letters that are not in the standard Latin alphabet. These are: č, ć, dž, đ, lj, nj, š and ž. Since their equivalents exist in most other European languages, these are nothing to be afraid of!

There are also a few letters in the Latin alphabet that don’t exist in the Croatian alphabet. These are: q, w, x and y. 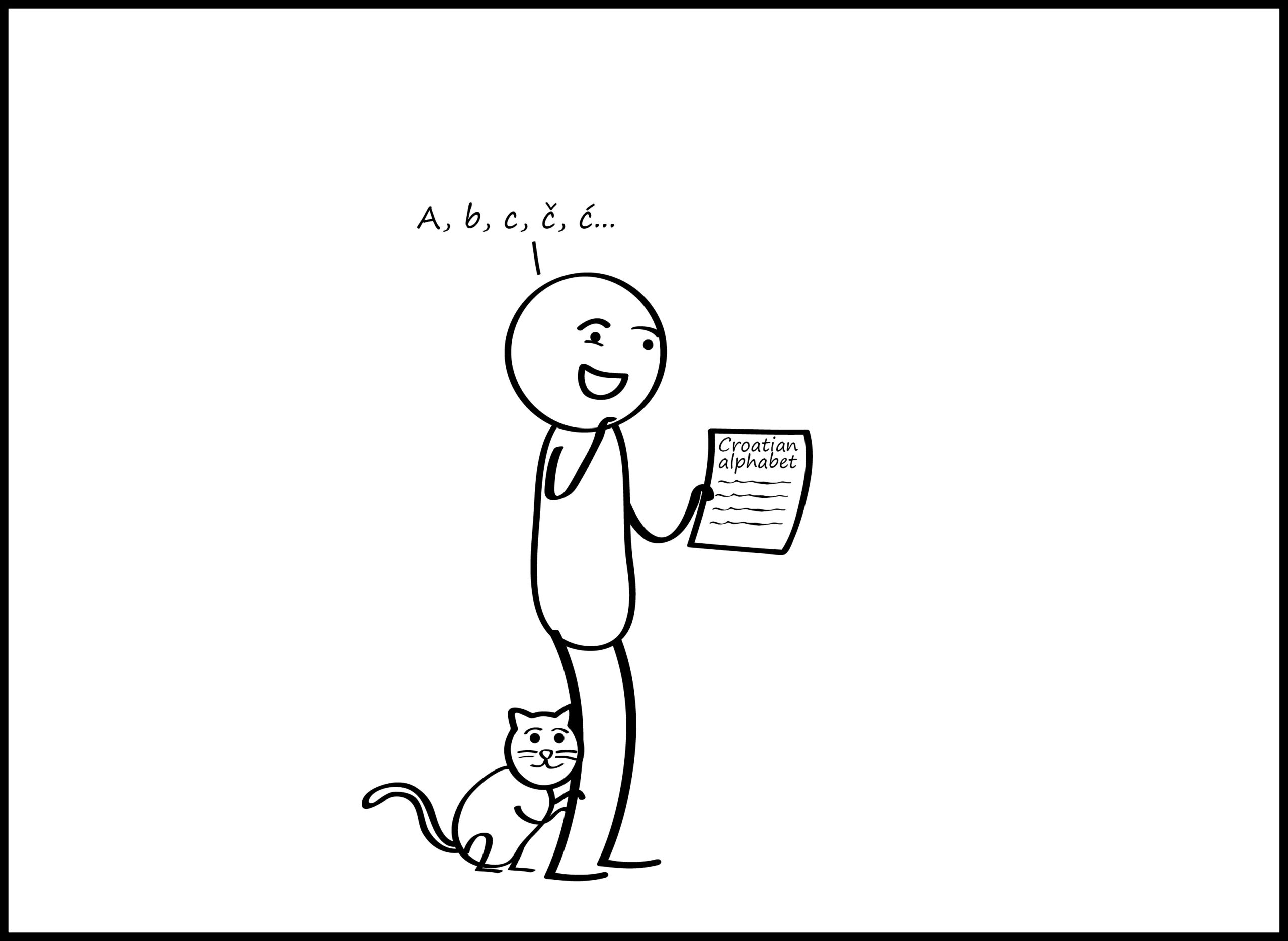 How long does it take to learn the Croatian alphabet?

Learning the Croatian alphabet doesn’t take long – probably less than 20 minutes, depending on your mother language and what other languages you speak, if any. If you know how to read and write Spanish, for example, it should take you probably less than 10 minutes, if you speak only English probably around 20 minutes or so, and a bit more for speakers of Asian languages. So, after such a short time of learning, you will actually be able to read Shakespeare in Croatian! This is not a joke! 🙂 I’m not saying that you would be able to understand it (Shakespeare), but if a Croat listened to you reading, they would understand you without too much trouble.

The difference in pronunciation between ć & č, and between đ & dž

There are some things that, as a teacher, I’m expected to tell you about the difference between ć & č, and between đ & dž. There are also some other things about it that I actually want to tell you, which, as a teacher, maybe I shouldn’t. But I will What I’m expected to tell you is that all of them: ć & č and đ & dž are all different letters/sounds and are supposed to be pronounced differently and that is correct – they should. What I actually want to tell you is that in real life that very often doesn’t happen, the HUGE part of native Croatian speakers don’t make any difference in sound between ć & č and especially between đ & dž, so it’s perfectly fine if you simplify your life and do the same. Whether native Croatian speakers make some difference in sound or not depends on what part of Croatia they come from – in Istria, for example, they tend to make quite a big difference between ć & č, and in other parts of Croatia there is a moderate difference or no difference at all.

For those of you who are curious and want to know more, here is how they are supposed to be pronounced:

ć – (“meko” ć – the “soft” ć) = tj. It is literally the sound that you get when t and j blend into one “soft” sound when pronounced together. Your tongue is positioned at the front end of the hard palate (i.e. the roof of the mouth), close to the front teeth.
Examples: ćelav (bald), kuća (house), cvijeće (flowers)

č – (“tvrdo” č – the “hard” č) = tš. Try to blend the sounds t and š into one “hard” sound and there you go! The tongue is positioned more backward against the hard palate.
Examples: čizme (boots), čokolada (chocolate), mačka (cat)

đ –  (“meko” đ – the “soft” đ) = dj. If you can pronounce “Django”, you know the sound đ! Like with the soft ć, your tongue is against the hard palate close to the front teeth.
Examples: đak (pupil), smeđe (brown), Mađarska (Hungary)

dž – (“tvrdo” dž – the “hard” dž) = dž. Literally, d and ž pronounced and blended together into one “hard” sound. Again, like with the hard č, your tongue is more backward against the hard palate.
Examples: džem (jam), džungla (jungle), patlidžan (eggplant/aubergine)

Can you hear any difference between those letters/sounds when you listen to the Croatian language?

The most frequent misconceptions about the Croatian alphabet and pronunciation

There are a few quite frequent misconceptions about the Croatian alphabet. The first one of them is to think that those little things above the letters č, ć, š… are accents. Well, they are not, they are all different letters and those little things that look like an accent (technically called ‘diacritic marks’) are a part of the letters. Omitting these diacritic marks can lead to all kinds of funny situations. For example, suppose you say: “Stavit ću malo kreme za sunčanje na svoju kozu.” instead of: “Stavit ću malo kreme za sunčanje na svoju kožu.” What you have actually said is that you will put some sun lotion on your goat rather than putting it on your skin. True story. We have heard such sentences from our students many times! 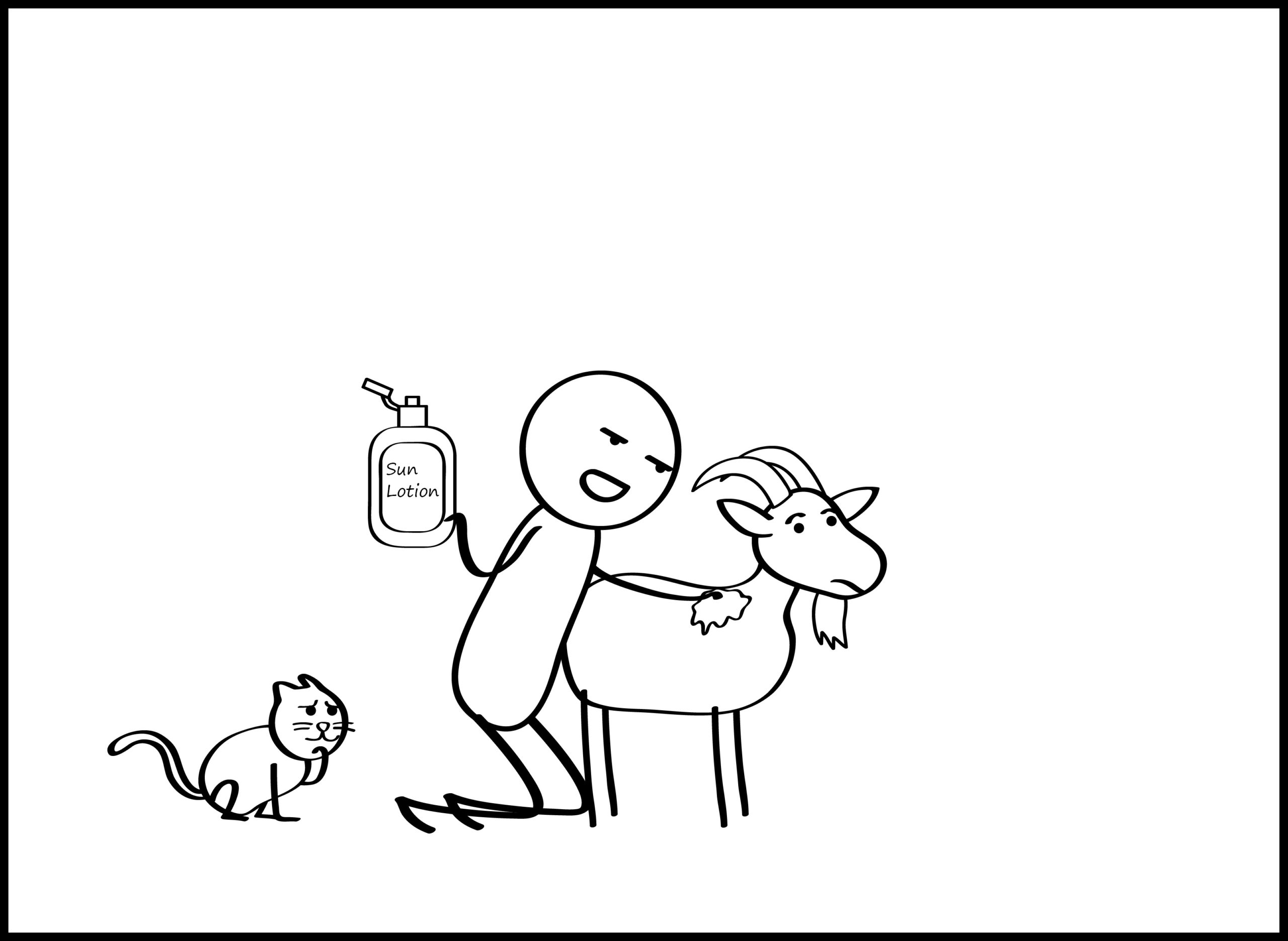 But, those are actually great moments in learning a language – laughing your head off when you realize what you have just said. That is a very important ingredient to the recipe of successful language learning: being open to laughing at yourself. Sooner or later you’ll say something hilarious. It’s inevitable.

The second most frequent misconception about the Croatian alphabet is to think that the letter lj is two letters – l and j. Actually, it’s a letter on its own; only it comprises two symbols. If you want to search for the word ljubav in a dictionary, you will find it under the letter lj, not under l. Just take a look: 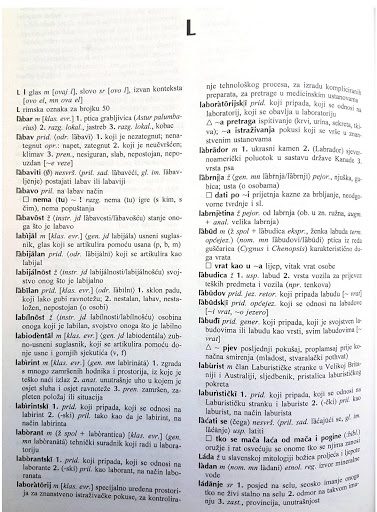 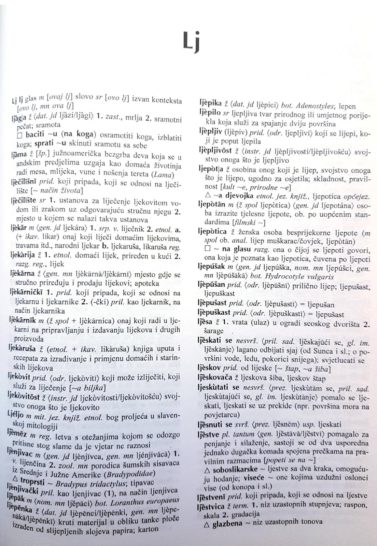 The same applies to the letters nj and dž – these are also letters on their own so, for example, the word njegov (his) will be under the letter nj in a dictionary, not under n.

If you follow the simple rule that each letter in Croatian is pronounced separately and clearly, regardless of its position within a word, then you shouldn’t have any trouble pronouncing words like auto, Europa, flauta or euforija. Just remember: there are no special combinations of letters in Croatian; 1 letter = 1 sound, so 2 letters = 2 sounds. Don’t fall under the influence of how similar words are pronounced in English! 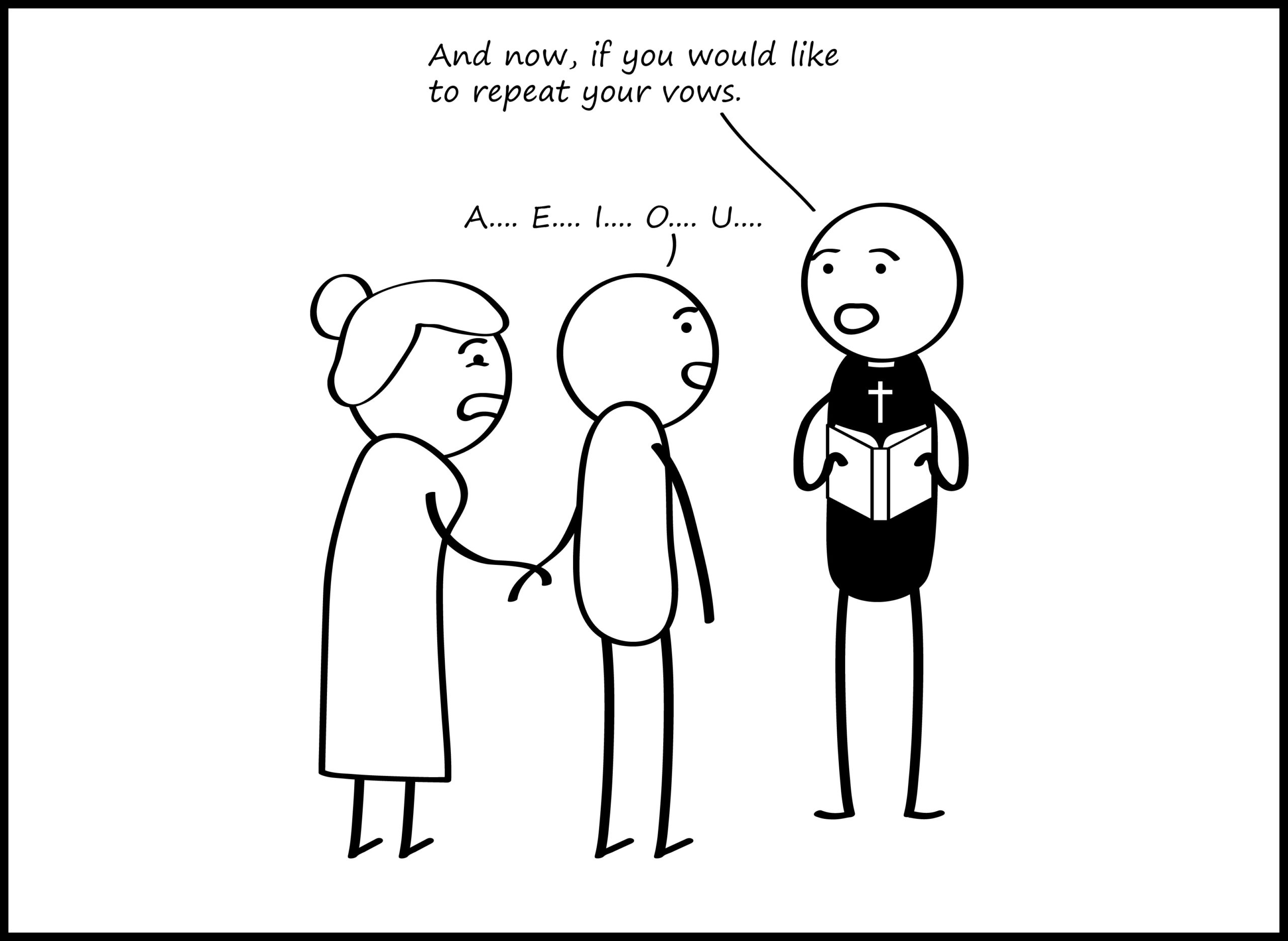 MYTH: Letters like r can be silent in Croatian.
FACT: There are no silent letters in Croatian.

The letter r in words like čuvar, kuhar, slikar, ormar, gospodar or veterinar is never silent – again, just remember that each letter in the Croatian language is always clearly pronounced. What is more, if you don’t pronounce the final r in these words, you can get completely different meanings of words, for example:

This primarily concerns the pronunciation of the letters g and j.

The Croatian g is always pronounced like the English g in the word guitar, never like the one in the word gender. So, be careful with pronouncing the words such as geografija (geography) or genetika (genetics).

J is pronounced like y in the word yes, so don’t be tricked by the words like Japan (Japan) or Jordan (Jordan).

What about the stress (accent) in the Croatian language?

No reason to stress about the stress! 🙂 There are 4 different stresses in the Croatian language: short rising, short falling, long rising, and long falling. Stress can be anywhere in a word, except at the end (except in some words that we have borrowed from other languages, like meni (menu) or sako (suit jacket). But, our experience shows that there is no need to get too technical about stress in the Croatian language because when you learn a new word you usually also hear it, and that way you learn how it sounds and where to stress it.

Have you learned the Croatian alphabet? How long did it take you to learn it?

Learning Croatian continues… In the next blog post, we will learn the most important grammar terms that you might find useful when learning Croatian as a second language. If you want us to send you an email with the next Croatian lesson, put your email address here.